美术馆2050通讯: Checking in from Bangkok

美术馆2050通讯: Checking in from Bangkok 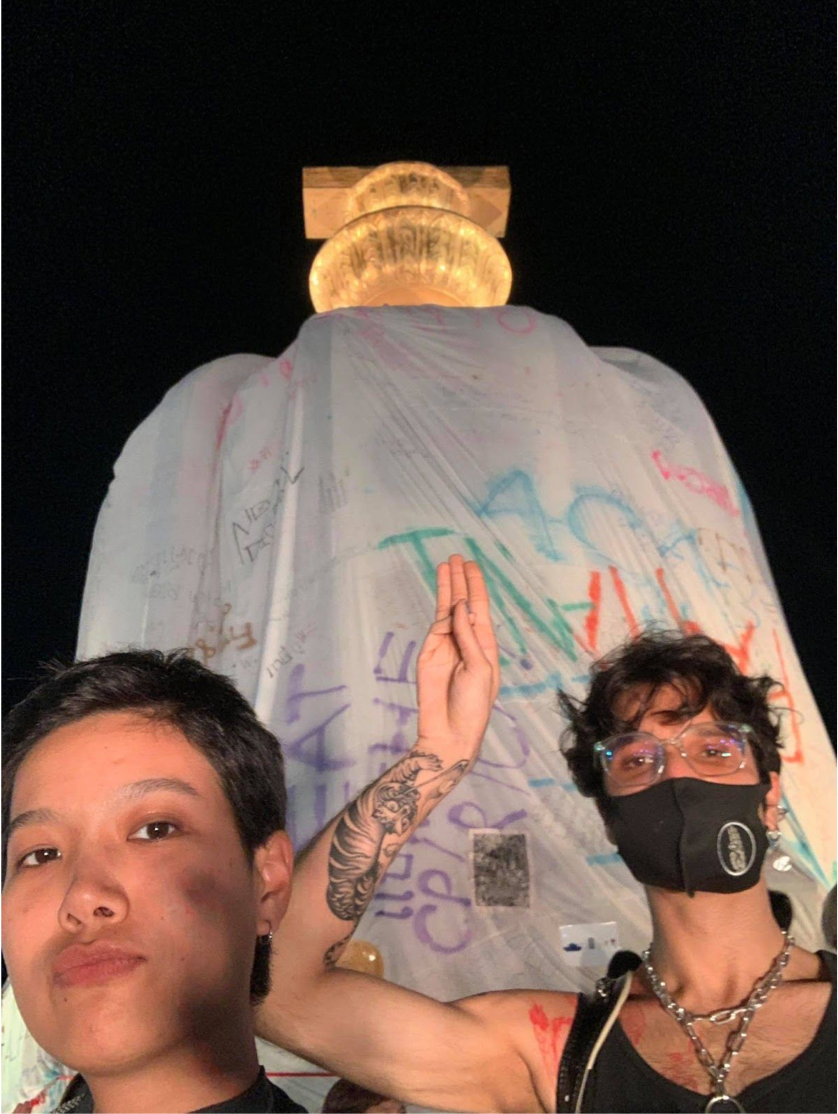 So what is happening in Thailand? 2020 saw the largest protests since the military coup that brought Prayuth Chan-O-Cha to power in 2014. While the movement had begun in the fall of 2019, it was dampened by the imposition of COVID-19 restrictions at the beginning of last year. As the pandemic escalated elsewhere, Thailand quickly brought its own outbreak under control, largely through the efforts of local organizations, as well as strict border controls, and by mid-April, became one of Asia’s coronavirus success stories. The easing up for restrictions in the country created a window of opportunity for the movement to resurge, and the first half of the year saw growing gatherings in the streets of Bangkok, followed by other cities. The movement in its current form really took off however, with the news of the forced disappearance of Thai dissident activist-in-exile, Wanchalearm Satsakit. Satsakit was in exile in Cambodia after being charged under Thailand’s lese-majeste laws when he was abducted, the latest in a series of abductions of activists-in-exile around the region. His last words spoken over the phone to his sister “I can’t breathe”, caught the imagination of the younger generation in Thailand, with its echoes of the killing of George Floyd earlier in the year in the USA. The hundreds who has been gathering in the streets grew to hundreds of thousands, and demands for an overhaul of the government and a re-examination of the laws shielding the royal family from criticism began to grow. This was met swiftly by violent retaliation from the government, who used water cannons and tear gas, to attempt to disrupt the protests – which were resisted using ingenious methods, most iconically with the use of inflatable rubber ducks as shields. The rubber ducks then became the symbol of the movement.

In parallel to this, or perhaps in tandem, Thailand’s art institutions have also had a busy year. The Bangkok Art Biennale became one of the only biennales in the world to go ahead as planned – in a year where we saw biennales like the Gwangju Biennale being postponed, or ones such as Riga changing format entirely. Even before the opening, the Biennale came into controversy when the organizers failed to stand with the protesters when they were brutally water cannoned outside the biennale’s main venue, the Bangkok Art and Culture Centre in central Bangkok. A statement released by (mostly international) artists such as Ai Weiwei, Din Q. Le, Ho Rui An etc in the exhibition condemned the organizers’ silence and called for statement of solidarity. Such a statement seemed unlikely to be forthcoming, despite many within the Biennale’s organizing team themselves supporting the movement, as the organization is funded by prominent members of Thailand’s ruling elite, including real estate developers, and monopolistic beverage manufacturers. It was therefore almost comical that the opening party of the biennale took place on the same day as a massive protest against corruption, happening a district and a half away. The protest, organized by the Free Art group, featured art exhibitions, performances, theatre, discussions and a satirical fashion show, and seemed to embody everything the staid gathering at the opening party, with its gathering of the same handful of artworld faces and bad alcohol lacked.

At the same time, other initiatives like the Khon Kaen Manifesto, taking place across two sites in the Northeastern Isaan region of Thailand, attempted to position themselves in alignment with the pro-democracy movement. The KKM, supported by the Jim Thompson Foundation, which also runs MAIIAM in Chiang Mai, as well the eponymous art centre in Bangkok, occurred as a series of interventions in sites of political and historical importance in Udon Thani and Khon Kaen. While many of the works presented in the shows were indeed poignant – particularly those by younger artists such as Nutdanai Jibutjong and Wilawan Wiangthong addressing contested political histories and presents, it would be difficult to label the project as a whole as radical – especially given that actions like Mobfest were being organized at the same time in the country. The inaugural action of Mobfest was the wrapping of the Democracy Monument in fabric in a Christo-like gesture (pictured) and through the course of the day and late into the night, people posted political slogans and poetry, while all around on the Ratchadamaneon Avenue, a stone’s throw from the Royal Palace, performances by acts such as Rap Against Dictatorship, Sriraja were joined by seminars and panels on the rights of women, LGBTQ people and sex workers. And all this planned and realized in the space of a week. This drastic contrast puts sharply into focus the crises of cultural organizing, and what the spaces of contemporary art allow and where they fail opening up new questions of how we would organize to meet these current realities.

I attempted to address these questions head on when I was conceiving of A House In Many Parts an interdisciplinary festival, that came together out of a collaboration between the Goethe Institut in Thailand, the French Embassy, through the Fond Frano-AllemandI proposed a format whereby practitioners in France and Germany would be invited to share a “care package” of some kind – which could take the form of.an instruction, a poem, an artwork with a practitioner from Thailand, who would then respond to this, and we would then develop a gathering around their response. I was thinking also about infrastructures and logistical networks, I invited the Paris-based collective Council, curator Lucas Morin, Berlin-based Sofia Lemos, the Aerocene Foundation and the collective Manifesto for Artists in a Strong State, based in the Bauhaus in Weimar as the correspondents, with Filmvirus, the Monitor Lizard House, Thanapol Virulhakul, Chulayarnnon Siriphol, Jeanne Penjan Lassus and Wirunwan Pitaktong being the Bangkok-based respondents. The festival was very much aimed at providing a platform for experimentation and the expression of aspirations for political futures of the moment. Indeed, the title itself responds to the idea of the need for the imagination of collective building of habitable futures that a moment of revolution asks of us, as cultural workers, and as participants in its moment, and to the broad intersectional aspiration that the leaders of the movement have articulated.

Abhijan Toto is an independent curator, researcher and writer based between Bangkok and Seoul, and the co-director of the Forest Curriculum.

Museum 2050 has always been about bringing people together through our community’s shared passion for museums and institutional development. As the world slowly and carefully starts reopening, we are checking in weekly with various members of our broader network to share personal reflections, anecdotes and musings about how they and their institutions have been operating in the face of this pandemic. In these incredibly difficult times for all, we hope that these brief vignettes from around the world bring us closer together, and remind us that even when the world stops and museum doors close, we still persevere.