Museum 2050 Dispatches: Checking in from the Bundeskunsthalle

Museum 2050 Dispatches: Checking in from the Bundeskunsthalle 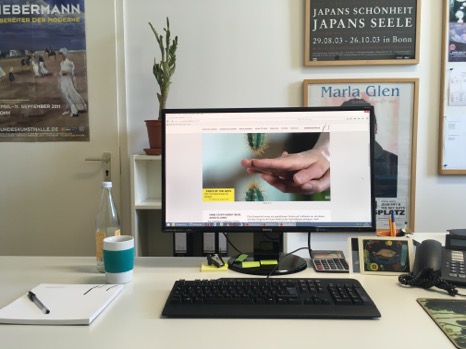 Updates from the Bundeskunsthalle

When the German government announced the social distancing guidelines and recommended sheltering-in-place in March this year, the exhibition “We Capitalists“ at the Bundeskunsthalle was opened for a mere one day. No one would have thought at the beginning of this year that an epidemic turned pandemic would have such profound and lasting impact on our lives, yet the reality which unfolded afterwards displayed the instability in the capitalist system. Taking a look at the exhibition, it is almost ironic to have an exhibition about the social impact and developments of capitalism, just at the time of the lockdown.

I returned to Germany beginning of January, prepared to spend some long-sought time with family during Chinese New Years. The anticipated break at home turned into a significantly longer one, with one month quickly turning into two, four and then eight months. Now, in the beginning of August, travel restrictions and shelter-in-place guidelines in Germany have been lifted, and movement within the country has mostly reawakened.

Still, it does not give me peace of mind, waking up since March to news and messages from friends in other cities, listening and talking about their forms of disruptions and adaptations in life. For some, it means not being able to return to their country of work or living, with entry and visa restrictions strictly in place, while others are not able to leave their country with fear of difficulties upon return. The parallel unfolding and the irony of people fighting for their ‚freedom’, against social distancing rules and recommendations for nose-and-face-coverings is not lost on me. At the same time, xenophobia and hate crimes against the Asian diaspora have appeared more frequently, in a frightening and openly manner in Germany and around the globe.

This period of time, I have been extensively thinking about how to bridge and reconnect to communities over distances, keeping up the feeling of closeness with everybody scattered across countries and continents. I am aware how privileged I am to have returned to my home country, and to have a safe undisturbed place to stay. It feels like a shift in our daily lives has just begun to crack open, and the same applies to institutions and museums.

After closed for almost two months, the Bundeskunsthalle opened its doors on May 12th to the public, with constantly updated hygiene measurements, contact tracing sheets and physical distancing guidelines. During the time of the shelter-in-place, the institution shifted rather quickly into the digital, with an extensive programming as many other institutions alike, such as a digital and extensive tour through the exhibition “We Capitalists – From Zero to Turbo“ with the curator Henriette Pleiger. Yet, the next big step is the question on how to keep up with an accessible, inclusive and long-lasting programming which extends beyond the digital into a mixed-method approach, taking the volatile environment into consideration.

The exhibitions in the beginning of the year gave a glance into the current climate, the fragility of our system and where we are based now. The exhibition “Fragments from Now – for an unfinished future“, a group show of young image-makers awarded by the Friedrich Ebert Foundation, addresses different burning social questions on migration, democracy as part of the current and future social discourse. The exhibition “State of the Arts“ presented the dissolving boundary of the contemporary arts and the performance arts into a wide variety of disciplines and was an early reminder of the perception of movements and distances. Currently open, “Double Lives“, presents video recordings and music videos by visual artists as practicing musicians, with headphones dangling in front of each screen, for visitors to touch and listen with, pre-pandemic times. I am hopeful yet vary of the future which holds for us in place.

Xiaoyao Xu is in the Department of Education at Bundeskunsthalle. She is based in Bonn.

Museum 2050 has always been about bringing people together through our community’s shared passion for museums and institutional development. As the world slowly and carefully starts reopening, we are checking in weekly with various members of our broader network to share personal reflections, anecdotes and musings about how they and their institutions have been operating in the face of this pandemic. In these incredibly difficult times for all, we hope that these brief vignettes from around the world bring us closer together, and remind us that even when the world stops and museum doors close, we still persevere.